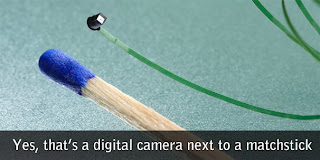 Say hello to the World’s tiniest camera. At just 1mm-wide, 1mm long, and 1.5mm tall, it’s smaller than a typical match head, and it lives on a single silicon chip.

Portuguese image sensor developer Awaiba created the tiny camera, named the NanEye 2B, for use in the medical industry. NanEye 2B draws only 1.8 volts of electric current, and can take “clear and sharp” 250 by 250-pixel pictures.

As you may have guessed, this lilliputian digital camera won’t be hitting stores anytime soon; instead, it will be put to use delving into human bodies in the name of science.

Awaiba sees the NanEye 2B being used for a variety of medical purposes, including dental imaging and medical endoscopy, and it could even be used to give surgical robots a boost.

IEEE Spectrum has posted an interview with Awaiba CEO Martin Wäny, which provides more information on the company and this camera. If you prefer the full geeky rundown of the NanEye 2B, head on over to the full specs sheet(PDF) on the Awaiba site.