[![](https://4.bp.blogspot.com/_A8fllzIwp8c/TPLK6uRppBI/AAAAAAAAAQI/x77O5BhzOc0/s200/wikileaks.png)](https://4.bp.blogspot.com/_A8fllzIwp8c/TPLK6uRppBI/AAAAAAAAAQI/x77O5BhzOc0/s1600/wikileaks.png)
Controversial whistleblower website WikiLeaks is reporting that it’s under a “mass distributed denial of service attack” just as its much-hyped leak of secret embassy cables has been leaked early on Twitter. According to a tweet from the website’s official Twitter account wikileaks, Wikileaks is experiencing a DDoS attack. The reported attackers are not yet known. Several reports state that the website has been experiencing intermittent downtime. We are currently attempting to verify that Wikileaks is indeed under attack. The attack comes just hours before the site is set to release thousands of new secret U.S. documents. Those classified documents reportedly contain secret and embarrassing cables sent by the State Department. U.S. diplomats have been briefing foreign leaders about what could be in those documents in an attempt to minimize the potential damage. Unfortunately for the whistleblower website though, it looks like the leak has been leaked early to several Germans, thanks to a leaked embargo copy of Der Spiegel. Gawker reports that the leak may not be as damaging as expected — for example, the cables praise German Chancellor Angela Merkel as being like “teflon” and compares Iranian president Mahmoud Ahmadinejad to Adolf Hitler. 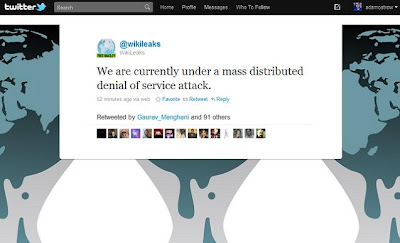 It’s safe to say that WikiLeaks is not having a good day.

[![](http://1.bp.blogspot.com/_A8fllzIwp8c/TPLQs-ynh0I/AAAAAAAAAQQ/P1mHVeUJzNE/s200/satellite.png)](http://1.bp.blogspot.com/_A8fllzIwp8c/TPLQs-ynh0I/AAAAAAAAAQQ/P1mHVeUJzNE/s1600/satellite.png)Two years ago when Nokia open-sourced the Symbian mobile operating system? The thinking was that cell phone manufacturers who depended

[![](https://2.bp.blogspot.com/_A8fllzIwp8c/TO8EzdUFvXI/AAAAAAAAAQE/ob87KVX6oGQ/s200/wave-flatline.jpg)](https://2.bp.blogspot.com/_A8fllzIwp8c/TO8EzdUFvXI/AAAAAAAAAQE/ob87KVX6oGQ/s1600/wave-flatline.jpg)Google Wave, which was thought to be all but extinct after Google ended development on the project, has been given