The current prototype battery is powerful enough to run basic music players, and in time, will be able to run mobile phones as well. The question of how to package it, with its liquid contents, remains unanswered however. 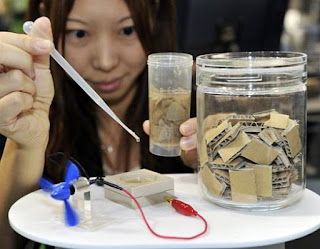 Sony’s bio-battery is also considered environmentally friendly as it doesn’t use any harmful chemicals. A prototype of the paper-powered battery was shown off at the Eco-Products exhibition in Tokyo, last week. Attendees were asked to drop a piece of paper or cardboard into the liquid (made up of water and the enzyme cellulase), and then shake it. A few minutes later, the battery powered up a small fan.

Breaking down the paper with the enzyme into glucose sugar, the battery then combines the sugar with oxygen as well as other enzymes, converting it to hydrogen ions, water, gluconolactone acid, and electrons – producing electricity. A large part of the process can be likened to how termites break down wood to produce sugar, and energy.

“Using a ‘fuel’ as simple as old greetings cards – the sort of cards that millions of us will be receiving this Christmas – the bio battery can deliver enough energy to power a small fan. Of course, this is still at the very early stages of its development, but when you imagine the possibilities that this technology could deliver, it becomes very exciting indeed.”