[![](https://4.bp.blogspot.com/-B4_p1NK-ous/T1Jtk43SZXI/AAAAAAAAAbc/fSId5hL2D3Y/s200/powerpuk.png)](https://4.bp.blogspot.com/-B4_p1NK-ous/T1Jtk43SZXI/AAAAAAAAAbc/fSId5hL2D3Y/s1600/powerpuk.png)
It is the nightmare of the wired world — a smartphone low on battery.
Now Swedish group myFC says its water-powered charger could be the fix anywhere. The battery giant Duracell is championing a push for cars and even stadiums to be built with energy “mats” that would power up phones.
A Californian firm, meanwhile, has launched a phone that it claims can remain charged for up to 15 years, making it the perfect spare in emergencies or disasters.
“The difference between the energy on a phone and the energy we consume is increasing. We need to charge more often but you don’t want to be hooked onto a wall,” said myFC chief executive Bjorn Westerholm.
[![](https://4.bp.blogspot.com/-hGlsleXVvFE/T1Jq8QT8dHI/AAAAAAAAAbE/6pbIlGG9Aco/s400/water+battery+puck.jpg)](https://4.bp.blogspot.com/-hGlsleXVvFE/T1Jq8QT8dHI/AAAAAAAAAbE/6pbIlGG9Aco/s1600/water+battery+puck.jpg) 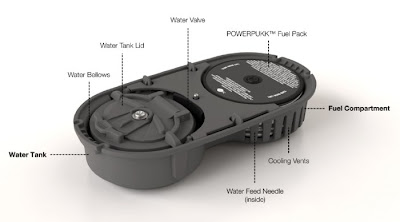 His firm has therefore come up with a portable fuel cell charger which is slightly larger than a compact camera and which uses just one spoonful of water and a small metallic device called a fuel puck, to fully charge an iPhone.
The PowerTrekk could appeal most to campers, aid workers or the military, said Westerholm, who is exhibiting the charger at the world’s biggest mobile fair in Barcelona.
“It could be sea water, fresh water. You need to carry water with you to survive anyway and the PowerTrekk needs just one spoonful,” he told AFP.
“So you can Facebook, email even when you’re in the outdoors for hours.
“Our value proposition is that you don’t need to go to the grid. You don’t need to wait to charge your phone.”
Competition for solutions to power up phones is fierce.
XPAL Power rolled out a phone with a battery that “lasts 15 years,” said Christian Scheder, chairman of the Californian firm.
The so-called Spareone, which will be commercialised in March, remains charged for up to 15 years if the phone is turned off, and for two months if it is on.
“This is great for emergency, disaster situations,” Scheder said.
Battery giant Duracell meanwhile has its own vision to keep the world charged.
It is championing the PowerMat system, a mat which looks like a small tablet that plugs into the power source and which has sufficient space to charge two phones which are equipped with special protective covers.
But that is just the beginning, Stassi Anastassov, Duracell President, told AFP.
Beyond just targeting consumers with the charging kit, Duracell is at the Mobile World Congress to talk phone manufacturers into designing a slot for a special chip or even build it into the telephone, thereby doing away with the protective covers that are currently required to dock with the mat.
The company further wants to fit the mats in public places, for instance, build them into tables at fast-food chains, thereby allowing anyone with equipped phones to charge up anytime.
It already has a deal with General Motors to fit all vehicles from 2013 with the charging mat. Likewise, it has an agreement to equip New York’s Madison Square Garden, starting with bar tabletops.
“Of course it will take many years, the whole ecosystem will not be up tomorrow,” said Anastassov.
“But our vision is that you will be able to never go out of power, simply by facilitating the whole charging process for you.
“It’s very similar to banking and money. If you want to have cash, you can either have a very big wallet full of money or you have an ATM card,” he said.

[![](https://2.bp.blogspot.com/-EmTEvpjsTJU/T1JwN1KpWNI/AAAAAAAAAb0/xoUWGbfdXGI/s200/Android.png)](https://2.bp.blogspot.com/-EmTEvpjsTJU/T1JwN1KpWNI/AAAAAAAAAb0/xoUWGbfdXGI/s1600/Android.png)A rather sizable security loophole allows Android apps to access the photo libraries of users without permission and copy them

Today, Google’s unified privacy policy goes live, allowing the search giant to combine and manipulate data from all its 60 free services, something it could not do under its previous policies.