Wireless keyboards are incredibly convenient when it comes to tapping away free of  constricting USB cables — until their batteries go dead. But a new solar-powered keyboard from Logitech promises to keep you typing long after traditional batteries have run out.
Available this month for $80, [Logitech’s K750 Wireless Solar Keyboard](http://us.rd.yahoo.com/dailynews/yblog_technews/tc_yblog_technews/storytext/logitech-keyboard-powered-by-solar-rays-indoor-lights/38302513/SIG=128dfe5q7/*http://www.logitech.com/en-us/keyboards/keyboard/devices/k750-keyboard) looks pretty much like your standard-issue keyboard. It is jet black; boasts a full complement of concave QWERTY keys, numeric keypad and function buttons; and measures just a third of an inch thick. 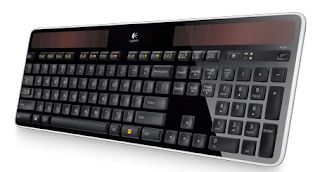 Look closer, though, and you’ll see twin solar panels flanking the Logitech logo above the main keypad. The panels soak up light from the sun and even indoor light, according to Logitech—meaning, theoretically, that the keyboard could work indefinitely in a well-lit office.
Logitech stopped short of claiming that the K750 will keep you typing forever given enough light, but it did say that the fully charged keyboard will work up to three months in complete darkness. (Cool. But I can’t imagine there’d be too many people willing to test that particular specification.) 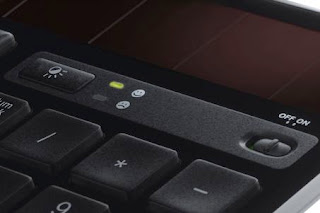 You’ll be able to keep track of the keyboard’s charge with help from an integrated light, and a downloadable desktop app will tell you if there’s enough ambient light to keep the keyboard powered up.
But Bluetooth fans will be disappointed to learn that the K750 connects to your desktop or laptop using a USB dongle over a 2.4GHz RF connection—so no, you won’t be able to type on your iPhone with this solar keyboard. Bummer.
At least you’ll be able to type away secure in the knowledge that your keystrokes are protected by 128-bit AES encryption.
Another potential downside: The minimum requirements for the K750 listed on Logitech’s website list only Windows XP, Vista and 7—no Mac. The keyboard and its RF-enabled dongle will work on Macs; however, there’s still no word on whether there will be a Mac OS version of the keyboard desktop app.
Still, the overall concept of the K750 is good. Now all we need is a solar-powered mouse to go with it.
Logitech: Product page