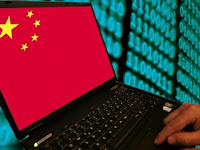 Hackers claiming to come from China defaced the website of the Philippines’ top university on Friday to assert their country’s claim over the hotly disputed South China Sea, the government said.

The foreign department, which has been leading the government’s response over its increasingly tense rift with China, immediately called for an investigation into the attack on the University of the Philippines website.

A screenshot of the defaced website, www.up.edu.ph, showed a map with Chinese script that highlighted islands in the South China Sea that are claimed by the Philippines and China.

“We come from China! Huangyan Island is Ours,” the map’s caption read.

Huangyan is the Chinese name for the Scarborough Shoal, where the two countries have had vessels stationed for nearly two weeks in a standoff to assert their rival claims to the area.

Foreign department spokesman Raul Hernandez suggested the hacking could be linked to the standoff.

“These computer hacking(s) are sometimes… done by some people who are passionately affected and involved in the discussion,” he told reporters.

“There has to be an investigation first to find out who exactly did this.”

The university temporarily shut the site down after the attack was detected on Friday, Jason Chao, network engineer of the school’s computer centre, told AFP.

“We’re in the process of restoring the site, but first we have to make sure that this will not happen again,” he said.