[![](https://2.bp.blogspot.com/-pICh4mwVkQ0/TqQf0xISuHI/AAAAAAAAAJ4/A9tQj2jTSds/s200/arm-chip.gif)](https://2.bp.blogspot.com/-pICh4mwVkQ0/TqQf0xISuHI/AAAAAAAAAJ4/A9tQj2jTSds/s1600/arm-chip.gif)
ARM, the world’s leading designer of mobile processors , has announced a new application processor design on 20th October, the ARM Cortex A7 MPCore, which it claims is its most energy efficient such processor till date.
Along with the Cortex A7, ARM has also introduced the world to the big.LITTLE processing platform, which will enable device manufacturers to find the balance between power and performance with ease, with its heterogeneous multiprocessing.
According to ARM, the Cortex A7 delivers five times the energy-efficiency of the Cortex A8, at one-fifth the size, all the while providing significantly better performance. The Cortex A7 will also be more cost-efficient for device manufacturers, enabling sub-$100 entry-level smartphones to bear them. Like the previous generation Cortex A8, the A7 is a simple in-order core capable of issuing up to two instructions in parallel. As such, it can also be used to make a cheap dual-core offering. 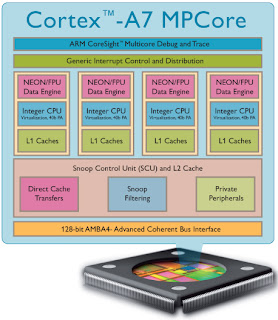 big.LITTLE processing platform is a energy-efficient SoC (system-on-chip) design that combines a high-performance Cortex A15 and A7 processor, allowing the device to “seamlessly select the right processor for the right task, based on performance requirements. Importantly, this dynamic selection is transparent to the application software or middleware running on the processors.”
ARM has optimized the big.LITTLE SoC design for multi-core solutions by adding support for advanced ARM system IP, such as AMBA 4 ACE Coherency Extensions. This purportedly ensures full cache, as well as I/O and processor-to-processor coherency, across the complete system.
The LITTLE half of the big.LITTLE system, or the lowest-power processor, will run the OS, as well as always-on or always-connected applications. When the system demands more performance, the higher-performance processor will take over the high-end tasks, such as graphics intensive applications of navigation and gaming. The switch or migration between processors takes about 20 microseconds.
Big.LITTLE power management software was developed by ARM months ahead of silicon availability using ARM DS-5 tools and Fast Model virtual prototyping technology. The virtual platform, available now to lead partners, contains the Cortex-A15 and Cortex-A7 processors, as well as cache coherent interconnect System IP, allowing full system software development.
ARM Partners supporting these technologies include Broadcom, Compal, Freescale, HiSilicon, LG Electronics, Linaro, OK Labs, QNX, Redbend, Samsung, Sprint, ST-Ericsson and Texas Instruments.
For more information on big.LITTLE processing, refer to this ARM link. For more information on the new Cortex A7 processor, refer to this ARM link. For deeper analysis of the offering compared to its predecessors, and the future of big.LITTLE processor, refer to Anandtech’s illuminating article on it.
Source:
Thinkdigit