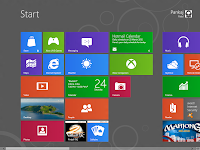 Microsoft’s upcoming Windows 8 operating system arrives this week. If you haven’t been paying close attention, the operating system’s new interface might come as a shock.

Microsoft has designed Windows 8 to work with many computing devices, with the exception of smartphones. You can use it on desktops, laptops, tablets, and hybrids like Samsung’s Smart PCs. Windows 8 runs on many older PCs and will come installed on all kinds of cool new devices. Here are eight things you need to know about Windows 8.

When does it come out?

You can download Windows 8 from Microsoft’s website on Friday, Oct. 26. If you prefer, on the same day you can purchase it in physical form at retailers such as Best Buy, Staples, Office Depot, the Microsoft Store, and Amazon.com.

How much does it cost?

For the vast majority of people running Windows today (XP, Vista, or 7), Windows 8 Pro costs $40 to download and upgrade using the Windows 8 Upgrade Assistant. Online upgrades are available in 140 countries and 37 languages. Microsoft says this offer expires on Jan. 31.
If you purchased a new non-Windows 8 PC after June 2 and before Jan. 31, you’re eligible to upgrade to Windows 8 Pro for just $15. Frankly, that’s a hell of a deal, as long as you like the new interface.

What are the differences between Windows 8, Windows 8 Pro, & Windows RT?

As with most Microsoft operating systems, Windows 8 comes in several different versions.

It is the most basic version of the operating system, specifically targeting consumers. It includes most everything you would expect to have, including the Start screen; major apps like Mail, Music, Calendar, and Internet Explorer 10; the Windows Store, and the desktop. Pricing and availability for plain Windows 8, weirdly enough, has not been announced.

8 Pro as far as we can tell, is the only version of Windows 8 available to consumers on launch day. It includes everything in plain Win 8 and more. Unlike plain Windows 8, it also includes features that power users might want like BitLocker, client hyper-V, domain join, encrypting file system, support for group policy, and remote desktop hosting. (These features are pretty advanced and mostly fulfill the needs of businesses and the overly paranoid.)

Windows RT shares a large amount of code with Windows 8 and looks a lot like it, but it is designed for different kinds of machines. It only runs on ARM-based processors that are more commonly found among smartphones and tablets rather than the x86 processors usually used in desktops and notebooks. Most notably, RT does not allow you to use software designed for x86/64 and legacy desktop software. It only works with software from the Windows Store. (In that, it’s much like Apple’s App Store with iOS.) RT also includes a reworked, less-powerful version of Office with apps for Word, Excel, PowerPoint, and OneNote. RT does not include Windows Media Player. The first time we’ll be able to fully test Windows RT is on the initial version of the Microsoft Surface tablet.

Microsoft will also sell a version of Windows 8 that can be purchased by businesses and educational, charitable, and government institutions.
For more information, check out this detailed blog post from Microsoft breaking down the different versions.

Will it work on my computer?

The minimum system requirements for Windows 8 are:

Windows 8 looks great on touch devices. How well does the new interface work on desktops and laptops?

This is one of the trickiest questions to answer about Windows 8. People use their PCs in wildly different ways, and desktops and laptops come in many shapes and sizes.

One of the biggest changes in Windows 8 is the disappearance of the Start button on the desktop. Instead, Microsoft gives you a full Start screen. On the Start screen you can see and arrange the apps on your computer. You can click the desktop icon on the Start screen to get back to the familiar interface you’ve been using in Windows for years. However, to use new Windows 8 apps, you must launch those from from the Start screen. The new interface is quite different, which means it’s a bit jarring and might scare away some users. (Important note: Developers already have apps that can bring back Start Menu-like functionality in Windows 8, including Pokki.)

If you’re a casual user running Windows 7 on a desktop computer, we’d generally advise against upgrading to Windows 8 for numerous reasons. If you’re a desktop user running XP or Vista, we’d seriously consider it and recommend trying out Windows 8 before upgrading. If you like it, go for it.
Desktop power users are a different story. If you’re a desktop user with multiple monitors and are happy to embrace keyboard shortcuts, Windows 8 will likely be a great upgrade for you.
We’ve got a different attitude about laptops. Generally speaking, Windows 8 works better on laptops than desktops because the touch pad and touch gestures are more natural to the Windows 8 interface. If you’ve got a laptop running Windows XP, Vista, or 7, and you’re not concerned about the changes, Windows 8 might be for you.

How do I get Windows 8 apps? How are these apps different from older Windows apps?

Is Windows 8 connected to “the cloud” for backing up documents and files?

Unlike Windows OSes of the past, Windows 8 is built with the cloud in mind. The OS includes SkyDrive, Microsoft’s cloud storage solution, built-in as a spectacular-looking application. SkyDrive is also be present in the next version of Microsoft Office and is the default place to save your files so you access them across devices.

Windows 8 looks a lot like Windows Phone 8. What’s the connection?

Windows 8 and Windows Phone 8 share some of the same internal software and app developers should be able to more easily port apps and games between the two. We’ve previously argued that Windows 8 will make Windows Phone relevant because of its “shared kernel.” However, for now they’re still separate operating systems.

You don’t need a Windows Phone smartphone to work with Windows 8. People with iPhones, Android smartphones, or other kinds of handsets will still be able to connect them with Windows 8 software, assuming your phone already does this with Windows 7, Vista, or XP software.